No Shake: Screen Stabilization in Android

Have you tried to read a book or an article like this while on a bus or walking down the street? I bet you tried! In this case you should notice that reading text in a such way is not a good idea since the screen constantly shakes. It seems that screen shaking is a big enough issue and eliminating it can promise a good UX. My idea is to use device accelerometer sensors to compensate for and smooth out screen content shaking in the same way as DSLR camera stabilizes its sensors/lenses. Technically, this is possible so why not try this yourself!

Firstly let’s look for existing solutions. There are several interesting articles about our subject.

These documents provide a very good explanation of the subject but there are no source codes or a pre-built application to try these solutions. Lets try to reinvent the wheel and implement it in our own manner. 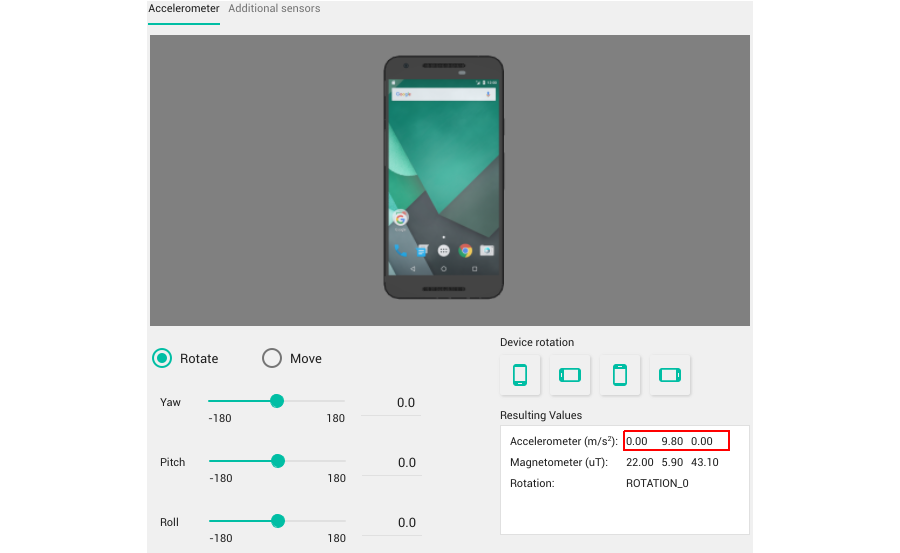 The acceleration is calculated in “m/s2”. As you can see we have some acceleration through Y axe. Actually it’s due to the acceleration of Earth’s gravity  and a simple rotation of the device will change all three values: 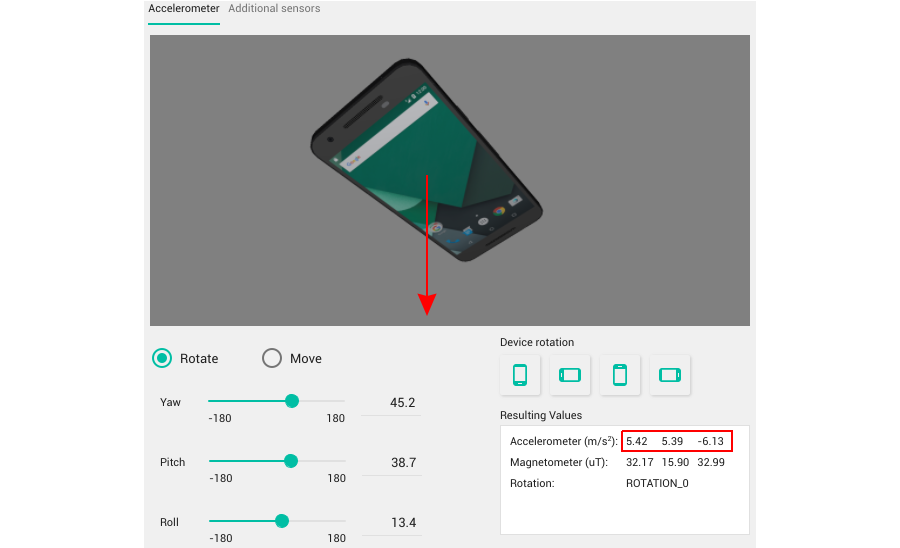 You can imagine it as a ball tied to the device using a wire. This explanation is good enough because if you replace the ball with an arrow you will get the acceleration vector.

Ok. But what about detecting device movement?

I can’t show you a good screenshot here, but if you move your device spatially a bit, then the designated vector will change: actually it will consist of two vectors: 1) the earth’s gravity vector as before; 2) the device acceleration vector due to movement within the axe(s). The most interesting part for us is solely device acceleration vector. It is easy to subtract the gravity vector from the final acceleration vector but how does one get a true gravity vector? This task can be solved in different ways, but luckily Android has the special Linear Acceleration Sensor to do exactly what we need. Normally this sensor output is zero and only moving the device will output non zero values. Here is its source code if you’re interested. We are one step closer to detecting device movements. Let’s start coding something.

I will only show here  key snippets. Complete code can be found in the GIT repository. The key things are:

1. The special view that we will move. It is the blue block with text inside view container:

Also subscribe to any view click event to reset calculation values to zero because at the first stage they will be very impish:

3. And the main thing: accelerometer listener. Its basic implementation:

Let’s examine what is going on here. Method onSensorChanged was called by the system every time the acceleration values were changed. Firstly, we are checking for initial call where timestamp field is not initialized. In this case we just initialize main fields to zero. In case this method is called subsequently we perform calculations using the following formula:

You should note an interesting number 10000. Treat it is as a some sort of magic number.

And here is the result:

As you see current implementation has two problems:

Actually, the fix is common for both issues - we need to introduce friction there. The modified formula is the following:

The final application can be found in the repository branch “standalone_app”.

We established basic stabilization algorithm and developed a proof-of-concept application which demonstrates that screen content stabilization is possible. Now we can apply these groundworks to the whole device. That is a challenging task but this makes it even more interesting.

This task requires some experience in AOSP building. Google provides all the necessary documentation. In essence, you need to download Android sources for selected Nexus device. Build Nexus image and flash it. Don’t forget to integrate the corresponding binary drivers before building.

Once you manage to get a working stock ROM image you can proceed to integrating screen stabilization.

The implementation plan is as follows:

Now I will just explain how I accomplished these tasks.

where the final transformation matrix is determined by the help of other components. All these variables are Transform class instances. This class represents transformations using matrices and has several overloaded operators (like *). To introduce a shift there add new component:

If you compile this and flash it onto your device it will shift the screen by translateX pixels horizontally and translateY pixels vertically. By the end we need to introduce a new method void setTranslate(int x, int y); which will control “translate” matrix.

2. The second file to look is SurfaceFlinger.cpp. This file is a key for making an API to accessing DisplayDevice. Just add new method:

which will call setTranslate for all displays. The other piece is very odd but I will explain it later. We need to modify status_t SurfaceFlinger::onTransact(uint32_t code, const Parcel& data, Parcel* reply, uint32_t flags) method by adding the following switch branch:

this piece of code is the entry point to our improvement.

3. The sensor data processing service is pretty simple: it uses the same algorithm developed earlier to get the screen offset values. Finally, it uses IPC to pass these values into SurfaceFlinger:

You can find all detailed information and the source code on GitHub.

Nexus 2013 Mobile ROM image. It is built in “userdebug” configuration so it is more for testing purposes. To flash the image, reboot the device into bootloader by holding “volume down” and pressing “power” button at the same time and type:

This procedure will erase all data on your device. Note to flash any custom ROM you need to unlock your device bootloader with a command:

This article shows how to implement a simple screen stabilization algorithm and apply it to the device by customizing Android source code and building custom ROM. The algorithm is not polished yet but is sufficient for demo purposes. We created custom ROM for Nexus 2013 Mobile device but resulting source codes can be applied to any Nexus device or even any other AOSP systems like CyanogenMod which makes it possible to integrate the screen stabilization solution into new devices.